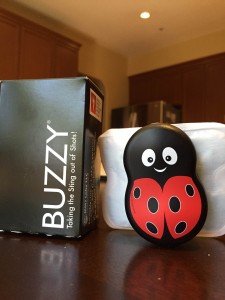 When it’s time for my kids to get vaccinations, I always get anxious. My son is only 1, so he doesn’t really know it’s coming and just cries a bit from the initial pain. My daughter, on the other hand, is 4 and she has her “Kindergarten” shots coming up.

She is deathly afraid of shots and needles. I can’t blame her as I also have an irrational fear of needles. As a matter of fact, when it came to childbirth I was more concerned about the IV and epidural than the birth itself. Ridiculous, I know.

Anyway, awhile ago I saw a product on Shark Tank that I thought was absolutely genius. A doctor created it and its main purpose was to help remove the pain from shots. I took a mental note and vowed to research the product later.

With 1 year shots and Kindergarten shots upon us, I thought now was the right time to find this product. It’s called Buzzy. Essentially, it’s meant to confuse your nerve endings and distract your brain from the pain of the shot. It’s completely external and simply uses a combination of ice and vibration.

Today was my son’s appointment and he had two shots, one in each leg. I used the Buzzy and he barely cried. My pediatrician was amused because these vaccinations tend to sting more than ones he’s had previously, especially the Chicken Pox vaccination.

It’s very easy to use. All you have to do is freeze the wings prior to your appointment and simply place the Buzzy between the “brain and the pain” and turn the vibration on while the shot is being administered. It’s also a good idea to let your kids see the Buzzy beforehand, just to get used to the vibration and what not.

I think the real test will be when we go back for my daughter’s appointment. At the very least, it could provide a distraction for her. I will definitely keep you posted.

In the meantime, if you’d like to try something that could help ease some of that vaccination anxiety and pain, then here is a link to the Buzzy: